How is the Federal Government Approaching Climate Resilience? 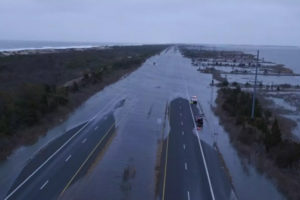 Extreme weather events—like wildfires, hurricanes, and some winter storms—threaten the stability of critical infrastructure that we rely on every day. This includes systems like roads, electric grids, supply chains, as well as how this infrastructure is used for military operations. The projected impact of climate change on these critical infrastructures is a key source of federal fiscal exposure because of the size of the federal government’s investment and states’ increasing reliance on the federal government for disaster assistance.

This past year may go on record as one of the most active and costly years for extreme weather events. As of Oct. 8, there have been 18 such events, each with losses exceeding $1 billion, according to the National Centers for Environmental Information. Disaster costs are projected to increase as certain extreme weather events become more frequent and intense due to climate change—as observed and projected by the U.S. Global Change Research Program and the National Academies of Sciences, Engineering, and Medicine.

One way to reduce long-term risk to people and property from natural hazards is to enhance climate resilience. Enhancing climate resilience means taking actions to reduce potential future losses by planning and preparing for potential climate hazards, such as extreme rainfall, sea level rise, and drought. The Administration is taking some actions through various climate-related Executive Orders, and we are monitoring implementation of these emerging efforts.

As our climate continues to change, experts say this trend of larger, more costly weather events will also continue. Today’s WatchBlog post looks at some of our work on federal climate-resilience activities.

Every year, the federal government spends billions of dollars to maintain buildings, levees, and roads. This cost could grow as certain weather-related events that cause damage increase in frequency and intensity.

For instance, if roads are flooded from dangerous amounts of rainfall or hurricanes, routes used for emergency evacuations can become unsafe and require costly repairs. Road damage due to climate-related changes may even cost up to $20 billion annually by the end of the century, according to the 2018 Fourth National Climate Assessment.

Over the last decade, the Federal Highway Administration (FHWA), which is part of the Department of Transportation (DOT), has developed policies, provided technical assistance, and funded climate-resilience research as part of its efforts to address climate change's impacts on roadways.

In our September report we found that some states were planning, or already made, changes to their infrastructure using FHWA resources. For example, in Maryland authorities raised a bridge by two feet in anticipation of rising sea levels. While some improvements have been made, more can be done to enhance the climate resiliency of federally funded roads. We identified 10 options for DOT to consider. For example, DOT could provide information to states on best practices and how to include climate projections into road planning and design.

DOT agreed to consider our options when prioritizing climate-resilience actions.

Severe weather is also expected to impact nearly every aspect of the electricity grid—including the generation, transmission, distribution, and demand for electricity. Extreme-weather events could cost billions—from power outages to infrastructure damage—and leave people without access to electricity.

In August 2021, Hurricane Ida resulted in at least a million people, across three states, without electricity and left seven people dead.

How can we better protect the electricity grid?

Although private companies own much of the electricity grid, the federal government is a key player in promoting its resiliency. Since 2014 the Department of Energy (DOE) and the Federal Energy Regulatory Commission (FERC) have taken steps to improve grid resilience, such as partnering with utilities and collecting information on weather-related risks to grid operations. However, DOE still doesn’t have an overall strategy to guide its climate-resiliency efforts despite recognizing the risks. Additionally, FERC hasn’t identified or assessed weather-related risks to the grid.

In a March 2021 report, we recommended that DOE develop a department-wide strategy to enhance grid resilience, and FERC identify and asses risks to the grid and plan a response.