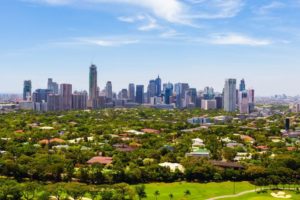 The City of Makati in the Philippines is named as the second Resilience Hub of Making Cities Resilient 2030 (MCR2030) in the Asia-Pacific region on 27 September 2022.

Makati has already been recognized as a Role Model City of the MCR 2010-2020 initiative by sharing know-how and experiences for reducing disaster risk, building urban resilience with other cities and participating in regional forums.

Under the leadership of Mayor Mar-len Abigail S. Binay, the city has adopted the principle of “Resilience is everybody’s business” at all sectors of society to manage disasters and build urban resilience in the country.

“We’re committed to continuing the journey of advocating resilience as a way of life through a Resilience Hub by collaborating with our constituents, partners and other local government units,” said Ms. Binay.

The Chief of the Regional Office for Asia and the Pacific at the United Nations Office for Disaster Risk Reduction (UNDRR), Mr. Marco Toscano-Rivalta, congratulated the Mayor, the City of Makati and its people for their vision and determination to continue strengthening disaster resilience and supporting other cities along the resilience pathway.

“Disaster risk is local, and it is at the local level where leadership, partnerships and solutions make a difference. MCR2030 is a catalyst for local action, a platform for collaboration and sharing of knowledge to localize disaster risk management and the implementation of the Sendai Framework for Disaster Risk Reduction,” said Mr. Toscano-Rivalta.

Makati, also known as a financial hub of the country, has developed a three-year plan of the Resilience Hub, which focuses on creating and building an online knowledge portal. The portal’s objective is to enhance peer-to-peer support, and disseminate risk data, information and expertise by conducting workshops, seminars and events related to strengthening urban resilience towards disaster risk reduction.

The plan also aims to improve city-to-city cooperation by working with other local governments in the Asia Pacific Region and beyond, promote synergies between cities to learn from each other and other disaster risk reduction activities, including capacity building, disaster preparedness, response and prevention.

The city is also in the process of developing the Makati Disaster Risk Reduction and Management Academy to learn from its best practices, using case studies and knowledge bases from other cities, leveraging experiences from an international group of practitioners who already participated in the initiative.

Notably, the city has continually mainstreamed and institutionalized disaster risk reduction management across all levels of the city since signing up to the MCR campaign in 2010.

As one of the pilot cities applying MCR tools, Makati held multi-sectoral annual workshops, reviewed and reassessed the city’s progress in implementing the Ten Essentials for MCR2030 through the Local Government Self-Assessment Tool.

The city was one of the first municipalities to utilize the Disaster Resilience Scorecard for Cities, which was developed through then UNISDR’s collaboration with global technology companies such as IBM and AECOM.