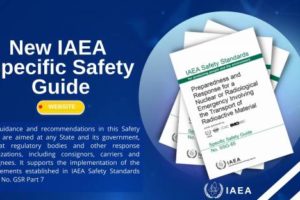 Historically, emergencies during the transport of radioactive material have had none or very limited radiological consequences, which have been resolved quickly. However, no matter how safe packages for the transport of radioactive material are, emergencies can still occur during transit, for which prompt action is required to ensure that the public and the environment are protected effectively. A newly released IAEA Safety Guide — Specific Safety Guide on Preparedness and Response for a Nuclear or Radiological Emergency Involving the Transport of Radioactive Material — addresses a wide range of possible emergencies, including those associated with very low probability events which might have significant radiological consequences.

"The field of transportation of radioactive material is one where radioactive material is intentionally moved across the public domain. Hence, transport activities involving radioactive material should be carried out in accordance with safety requirements and security guidance,” said Farid Abdelmounim, Senior Engineer at the Centre National de Radioprotection, Ministry of Health, Morocco. “This new guide addresses important emergency preparedness and response (EPR) concepts such as the protection strategy, the concept of operations and the interface with nuclear security. “

The recommendations in this guide are aimed at countries; “consignors”, who prepare shipments for transport, carriers, who transport them; “consignees”, who receive them; regulatory bodies; and, response organizations.

Each of these roles are vital in emergency preparedness and response and their responsibilities include the following:

governments, for example, should ensure that the responsibilities of national and local government for a transport emergency are clearly defined, and that the national coordinating mechanism for nuclear and radiological emergencies includes the authorities responsible for transport safety and security;

carriers should ensure that emergency instructions and information applicable to the consignment are carried with the consignment on the conveyance (road vehicle, train, aircraft or sea vessel) at all times, and that this information is readily available to response organizations in the event of an emergency.

“The main objectives of the publication, and the associated training, are to bring together the emergency preparedness and response community and the transport community, to exchange ideas and experiences including on how best to coordinate and integrate emergency arrangements with safety and security measures in protecting the public and the environment from harmful effects of exposure to ionizing radiation,” said Svetlana Nestoroska Madjunarova, Emergency Preparedness Coordinator at the IAEA’s Incident and Emergency Centre.
Bridging the transport and emergency preparedness and response (EPR) communities

Radioactive material has a wide range of applications, and as a result, millions of packages containing radioactive material are transported every year by rail, road, sea, air or inland waterway. This includes the movement of containers (casks) carrying spent nuclear fuel from operating and decommissioning nuclear reactors and sealed radioactive sources, which are used widely in medicine, industry, and agriculture.

Effective preparedness and response for transport emergencies involving radioactive material is thus a topic that has broad relevance for all countries, irrespective of whether they have a nuclear power programme.

To heighten awareness of this topic, two trainings on the new guide were carried out last year, with at least two more planned for 2022.

“A transport emergency is different than an emergency in a fixed facility. A transport emergency can take place anywhere, in the middle of a busy city, or in a remote location where first responders may be hours away,” said Luis Portugal, Head of the Emergency Preparedness and Response Unit of the Portuguese Environment Agency, who contributed to the development of the training in conjunction with the IAEA. “When we designed the training, we wanted to raise awareness in the emergency preparedness and response community, and the transport safety community, of the particularities of an emergency occurring during the transport of radioactive materials and how these can impact the planning for, and response to, any event,” he added.

“The transport safety regulatory requirements set out in the IAEA Safety Standard Series — SSR-6 (Rev.1) — have benefitted from continuous review and development since they were first introduced in 1961. Complemented by the IAEA safety requirements in the IAEA General Safety Requirements Part 7, they help in effective regulation of transport safety and establishment of effective emergency arrangements during the transport of radioactive material,” said Stephen Whittingham, former Head of the Transport Safety Unit in the Division of Radiation, Transport and Waste Safety. “With this Safety Guide and associated training material supporting the implementation of these two sets of safety requirements, we contribute further to their practical implementation in countries to protect the public and the environment effectively from the harmful effects of ionizing radiation.”