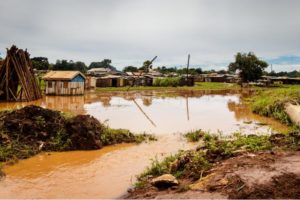 The great West African drought that started in the 1970s was undoubtedly a turning point in the region’s environmental discourse. It is well recognised as one of the most significant climate-driven disasters in recent history. The event was the onset of an era of rainfall uncertainty and variability, driving recurring floods and droughts across the region.

West Africa, an agglomeration of 16 countries, spans from the dense humid forests of the south to northern Saharan desertscapes (Figure.1). The region’s rainfall cycle is controlled by the Intertropical Convergence Zone. Changes in rainfall patterns have been attributed to climate change as well as land-use changes. ‘The Sahelian paradox’, is the increase in river flows despite reducing rainfall seen in many river basins. The complexity of hydrological and regional wind systems make it difficult to accurately predict long-term rainfall trends and their consequences.

The Economic Community of West African States (ECOWAS) has invested significantly in drought management in the past. However, these nations have been unprepared for the sudden rise in floods over the last decade. In 2020, a year of particular flood severity, 198,000 homes were destroyed or damaged, 96,000 people were displaced and 2.2 million people were affected across West and Central Africa. If no action is taken, an estimated 32 million people will be forced to migrate internally by 2050.

In response to increasingly frequent disasters, many early warning systems for floods have been launched in West Africa. Flood early warning systems are typically designed around four broad considerations: knowledge of risks, monitoring and warning, response capacity and communication. These systems monitor real-time atmospheric conditions to predict weather conditions, and warn people and governments on how and when to act to minimise disaster impacts. Such tools are especially effective when emergency action plans are laid out and agreed upon by different stakeholders.

Existing flood early warning systems (FEWS) have not been able to meet stakeholders’ needs regarding timeliness of information, geographical coverage, uninterrupted communication, accuracy and open ownership. To increase the adoption, effectiveness and usefulness of warning systems, stakeholder engagement in the design phase is crucial. Generally, empirical evidence on the effectiveness of participatory processes in sustainability science and disaster planning has been weak.

The second and broader objective explored the relevance of using MCDA as a participatory and transdisciplinary approach for a large project potentially benefiting millions of people across several countries. The participatory process was designed around three key project phases and implemented through a series of stakeholder workshops (Figure 2).

During the first phase of co-designing, stakeholders developed a joint understanding of the problems of existing flood warning systems. They came to a consensus on objectives that were needed to prioritise functions in the warning system. The second phase focused on knowledge co-production, where scientific and societal perspectives and practitioners’ expertise from different sectors were integrated.

The aim of MCDA was to design a FEWS in a way that best meets the objectives and preferences of all stakeholders. During the final stage of co-dissemination and evaluation, the aim was to translate the knowledge produced into solution-oriented and scalable products.

From the co-designing phase, ten objectives emerged as fundamentally important to stakeholders, clustered into four groups. These were clarity and accuracy of information, reliable and timely information access, affordability of production development and operation, and long-term financial and operational sustainability of the early warning system (Figure 4). The ten objectives received different weights depending on their importance to stakeholders.

Of the eleven versions of FEWS that were created by stakeholders and the FANFAR consortium, three were assessed to be well-performing and robust. One version, for example, could function with relatively minimal resources such as poor internet connectivity, unstable power supply and a limited number of skilled personnel. It suggests the FEWS should be simple and robust rather than incorporating many complex features.

The uptake of the FANFAR FEWS in West Africa will depend on a multitude of other factors. These include operational data collection, strategies to increase local capacity, securing long-term funding for operations, maintenance, and technical development. Local and regional governance structures also play an important role. However, because it was built on a common understanding of contextual challenges among diverse stakeholders, we believe the resultant FEWS will be useful to stakeholders from different regions, sectors and professional backgrounds. 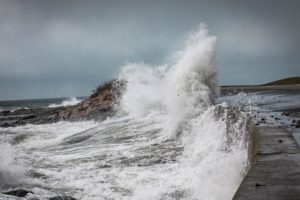 New WMO Guidelines on the Implementation of a Coastal Inundation Forecasting Early Warning System offer solid and practical advice for countries, donors and experts seeking to set up early warning systems against an increasing hazard.

The guidelines are a contribution to the UN Early Warnings for All initiative and reflect the high priority needs of small island developing States (SIDS) and Least Developed Countries that are particularly vulnerable to these coastal hazards.

“The severity of the impacts of disasters, especially on coastal communities, is well known and documented. A contributing factor is the increasing intensity and frequency of meteorological and oceanographical hazards caused by climate change, including sea-level rise, which can seriously affect SIDS and other coastal nations,” state the guidelines.

“It is critical to recognize that coastal inundation can result from single or multiple hazards, and that it is being exacerbated by the impacts of climate change, especially associated with sea-level rise."

“Coastal inundation events are an increasing threat to the lives and livelihoods of people living in low-lying, populated coastal areas. Furthermore, the issues for most countries that have vulnerable coastlines are the increasing level of development for fishing, tourism and infrastructure, and the sustainability of their communities,” it says.

The new guidelines were presented during a side event during WMO’s Commission for Weather, Climate, Water and Related Environmental Services and Applications (SERCOM), attended by more than 140 participants from all over the globe, including the South Pacific, the Caribbean, and Africa.

WMO is grateful to the Climate Risk and Early Warning Systems Initiative and the Korean Meteorological Administration for financial support.

These guidelines are based on the successful implementation of demonstration systems in four countries between 2009 and 2019 through the Coastal Inundation Forecasting Demonstration Project, which included a special focus on Pacific islands. They also incorporate key principles of WMO's Flash Flood Guidance System (FFGS) and the Severe Weather Forecast Programme.

The aim is to be a “one-stop” shop that countries can follow to prepare and implement their own coastal inundation forecasting early warning system. It provides a straightforward 10 step process with templates featuring policy, management and technical processes that countries or regions can use to build their own early warning system, from vision through to “go-live” implementation. As such information is not always readily available in many countries, these guidelines have concentrated on these features in developing and building a system, including necessary information for sponsors and advice on the resources necessary for success.

The Guidelines are also a registered activity of the United Nations Decade of Ocean Science for Sustainable Development. 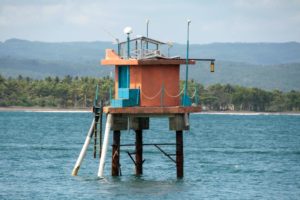 Different and multiple hazards, such as severe weather conditions in land and at sea, droughts, hurricanes, floods, and earthquakes, pose a serious threat to the Caribbean, which is one of the most disaster-prone regions in the world. Combined, geological and hydro-meteorological hazards have affected more than 100 million people in the region, causing significant economic losses and casualties.

The development of Early Warning Systems has been identified by the Sendai Framework for Disaster Risk Reduction 2015–2030, the 2030 Agenda for Sustainable Development, and the Paris Agreement as a key pathway to prevent disasters and reduce the negative impacts of multiple hazards.

As defined by the UNDRR, Multi-hazard Early Warning Systems are "an integrated system of hazard monitoring, forecasting and prediction, disaster risk assessment, communication and preparedness activities systems and processes that enables individuals, communities, governments, businesses and others to take timely action to reduce disaster risks in advance of hazardous events".

The Climate Risk and Early Warning Systems Initiative (CREWS) is a mechanism that provides financial support to Least Developed Countries (LDCs) and Small Island Developing States (SIDS) to establish risk-informed early warning services, implemented by three partners, based on clear operational procedures. CREWS has recently donated an additional $1 million to support the project Strengthening Hydro-Meteorological and Early Warning Services in the Caribbean , which will be implemented by UNDRR in 2022.

The project aims to strengthen Early Warning Services (EWS) in the Caribbean and to articulate the response capacity of individuals, institutions, and communities through the development of a regional strategy to strengthen and streamline early warning and hydro-meteorological services. This includes developing appropriate approaches to risk-informed decision-making for EWS, identifying gaps in risk assessment at regional and national levels, and evaluating the resilience of already existing infrastructure such as forecasting centres, shelters, and National Meteorological and Hydrological Services. The project will also examine opportunities for building partnerships with the private sector and assess socio-economic benefits to ensure the sustainability of investments and activities.

This project aligns with the Sendai Framework and focuses on the implementation of target G, which aims to “substantially increase the availability of and access to multi-hazard early warning systems and disaster risk information and assessments to people by 2030”. The Sendai 7 campaign of the 2022 International Day for Disaster Risk Reduction will be focusing on this same target. Ensuring access to Multi -hazard Early Warning Systems in the Caribbean is regarded as a tool that enables individuals, communities, governments, businesses, and other stakeholders to take timely action to reduce disaster risk in advance of hazardous events.

This is also a matter of urgency, as disclosed in the Regional Assessment Report on Disaster Risk in Latin America and the Caribbean (RAR21), published last year: “In the short and medium term the occurrence of new mega-disasters in the region is almost inevitable given the extreme risk embedded there. It is therefore urgent to strengthen corrective and reactive management capabilities, especially early warning systems, preparedness and response.”