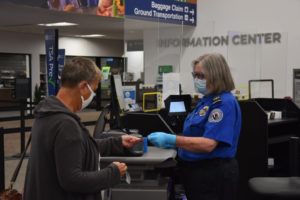 A credential authentication technology (CAT) unit has been installed and is in use at the Transportation Security Administration checkpoint at Capital Region International Airport (LAN).

“The new credential authentication technology unit enhances our detection capabilities for identifying fraudulent ID documents and improves the passenger’s experience by increasing efficiency during the checkpoint experience,” said Michigan TSA Federal Security Director Steve Lorincz. “The CAT unit also reduces touchpoints at the checkpoint, which benefits both officers and travelers during this pandemic.”

Passengers will approach the travel document checking station at the checkpoint and listen to the instructions of the TSA officer, who will insert the personal identification into the scanner for authentication.

Passengers will not have to hand over their boarding pass (electronic or paper), thus reducing a touchpoint. Instead, they should have their boarding pass ready in the event that the TSA officer requests visual inspection. The CAT unit will verify that the traveler is prescreened to travel out of the airport for a flight that day; however, a boarding pass may be requested for travelers under the age of 18 and/or those without IDs or with damaged IDs.

“We are pleased that TSA is taking steps to enhance the technology to ensure the safety and security of our travelers here at the Capital Region International Airport (LAN),” said Nicole Noll-Williams, president and CEO of the Capital Region Airport Authority.

Even with TSA’s use of CAT, travelers still need to check-in with their airline in advance and bring their boarding pass to their gate agent to show the airline representative before boarding their flight. 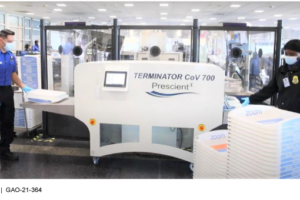 Within TSA, approximately 46,000 TSOs stationed across the nation's commercial airports perform screening and other activities that often require close interaction with passengers. As a result, both passengers and TSOs may be at an increased risk of infection during pandemics such as COVID-19.
The CARES Act included a provision for GAO to conduct monitoring and oversight of the federal government's response to the COVID-19 pandemic. This report identifies 1) what steps TSA has taken to reduce the spread of COVID-19 at passenger screening checkpoints; and 2) how TSA is monitoring TSOs' implementation of amended safety and screening procedures, among other objectives.
GAO analyzed TSA data on TSOs' use of paid leave, reviewed documentation on policies and procedures, and interviewed TSA officials at headquarters and eight U.S. airports. We selected these airports to reflect diversity in the number of COVID-19 cases among TSOs, airport size, and geographic region. In addition, for six of these airports, GAO reviewed closed circuit television footage to observe how TSOs were implementing COVID-19 procedural changes.
To reduce the spread of COVID-19 at passenger checkpoints, Transportation Security Administration (TSA) officials issued amended safety measures to require that Transportation Security Officers (TSOs) use surgical masks and face shields, change gloves after pat-downs, and physically distance themselves from coworkers and passengers as practicable. TSA also adjusted some screening procedures, such as asking passengers to remove more items from carry-on baggage to reduce the potential for alarms that require bag searches. In addition, TSA modified the use of certain checkpoint screening technologies, and granted TSOs additional paid leave. In January 2021, TSA began an employee vaccination program, and is in the process of vaccinating TSA employees, including TSOs.
TSA's monitoring and analysis of its measures to reduce the spread of COVID-19 is limited. For example, supervisors' operational checklists do not specifically include the revised COVID-19 procedures, and the data that TSO monitors collect (e.g., on whether TSOs are properly wearing masks or changing gloves) reflect implementation at a point in time rather than throughout a shift. Conducting more complete monitoring would help TSA ensure that its TSOs are properly implementing COVID-19 procedures. In addition, TSA field leadership analyzes available monitoring data for different subsets of airports to understand how COVID-19 procedures are being implemented. However, TSA headquarters officials said they had no plans at the time of our review to analyze this data across all airports nationwide to identify common implementation problems, such as incorrectly wearing face shields and challenges with maintaining physical distance. Analyzing monitoring data across all airports would help TSA identify and address any system-wide deficiencies in implementing COVID-19 procedures, so that it may better protect its workforce and the traveling public.
Leave a comment criticalinfrastructureprotection, transportsecurity

Substantive regulatory progress has been made since last year, despite the global COVID-19 pandemic that paralyzed supply chains in some industries around the world and shifted the mobility landscape considerably.
Still, progress towards fully autonomous driving has been slow. Five levels have been established within the industry for assisted, automated and autonomous driving. Fully autonomous driving is represented by only Level 5.
SAE levels of automation
Here are the top three takeaways from the recent Symposium on the Future Networked Car 2021:
1. Regulatory efforts are advancing in preparation for Autonomous Driving Systems (ADS)
The past year has seen considerable progress at the global, regional and national levels. The shared nature of most transport infrastructure and automotive supply chains means that common standards and interoperability in the manufacture and communication capabilities of different types of vehicles will be vital.
At the global level, two new regulations were introduced recently from United Nations’ Economic Commission for Europe (UNECE) on Cybersecurity (UN Regulation 155) and Software Updates (UN Regulation 156). A new UN Regulation 157 on Automated Lane Keeping Systems for highly automated driving up to 60 kph on motorways was recently approved.
Regulatory preparedness is mostly being developed at the regional level, with vehicle type approval, product liability and general product safety, and roadworthiness tests developed by the European Union and also in the Asia-Pacific region.
At the national level, developments include liability, traffic rules, regulatory mandates, trials, and infrastructure. For example, Finland has authorized Level 5 driving, and Germany has already authorized the use of automated vehicles on its motorways.
2. Fully Autonomous Driving Systems (ADS) are still a long way off
Currently, mainly only Level 2 vehicles are available on the market (other than autonomous shuttles and an autonomous taxi service operating in Phoenix, Arizona, the United States since October 2020). However, Honda recently announced its first Level 3 driving system, due to be launched later this year.
The car industry, highways agencies and transport regulators are working together to overcome the significant challenges introduced by autonomous driving. Chief among these are safety considerations – and what constitutes ‘acceptable risk’ for car occupants, as well as the broader public.
Data challenges also persist, from the capture and preservation of data to its interpretation and protection. Improving the physical environment with markers to make a more intelligent environment for automated, let alone autonomous, vehicles is another challenge, as well as collaboration that would enable intelligent vehicles to function across borders.
Other major challenges include the introduction of self-learning artificial intelligence (AI) systems in automated driving systems, as well as cybersecurity considerations – how to prevent unauthorized or illegal intrusions into connected cars or their networks.
3. The communication and data demands of ADS will be enormous
The changes driven by the advent of ADS are many and large. Even cars already on the road today are said to be running over 150 million lines of code. Many participants emphasized the changes needed in physical infrastructure, such as 5G masts and improved road markings, as well as the information needs and data demands, for mapping and object identification, for instance.
5G will be instrumental in improving automated driving and its communication needs like smart parking, but also V2V (vehicle-to-vehicle) and V2I (vehicle-to-infrastructure) communications. A host of innovations and improvements are needed throughout the vehicle ecosystem to help create an optimal real-world environment for automated driving systems. ITU is working with all stakeholders to help realize these innovations in the interests of smarter and safer mobility.
[Source: ITU]
Leave a comment AI, autonomous, criticalinfrastructureprotection, smartcars, tansport, transportsecurity

Strengthening the security of nuclear and other radioactive material in transport, and developing practical skills for planning, conducting and evaluating transport security exercises was the focus of a recent IAEA workshop held in Romania.
“Nuclear and other radioactive material is regularly transported from one place to another for various uses, such as for medical applications, agriculture, nuclear power and scientific research,” said Elena Buglova, IAEA Director of Nuclear Security. “When this material is in transport, whether nationally or internationally, it is potentially vulnerable to security threats, for which we need to be vigilant.”
The four day workshop included classroom presentations and field demonstrations, as well as a virtual exercise in which participants watched a simulated event involving an attempted malicious interception of a vehicle transporting a radioactive source, and practiced evaluating the situation and developing an appropriate course of action in a realistic and interactive way. These actions included summoning additional response forces and executing evasive and protective maneuvers to prevent the adversaries from achieving their objective.
“Romania experiences a high number of nuclear and other radioactive material shipments both within and across its borders,” said Sorin Repanovici, Senior Expert at the Romanian National Commission for Nuclear Activities Control (CNCAN). “Ensuring that our response plans are effective and that all national stakeholders are fully trained to rapidly respond to a nuclear security event during the transport of these materials is of utmost importance.”
“By practicing scenarios during exercises and assessing our capabilities, we can establish good practices, as well as identify areas needing improvement, so we can then make targeted efforts to strengthen our national nuclear security regime,” he added.
It is estimated that worldwide, around 20 million shipments of radioactive materials are transported every year. The IAEA assists Member States to enhance their capabilities to help ensure both the safety and security of nuclear and other radioactive material during transport. Safety, in this context, refers to protecting the public from the radioactive contents of a package, whereas security refers to guarding nuclear and other radioactive material with locks, seals and other technologies and methods to prevent it from falling into the wrong hands.
Nineteen participants from national stakeholder organizations involved in nuclear security took part in the workshop, including nuclear security response forces, the national regulator, and nuclear facility operators and carriers. Discussions focused on the need for robust coordination among stakeholders and the importance of conducting and learning from regular transport security exercises, in order to properly evaluate the readiness of response forces to deal with a nuclear security event during transport.
The workshop was conducted in a hybrid format, which included in-person presentations from local and IAEA instructors, as well as virtual contributions from experts in the United Kingdom and the United States. The Romanian Horia Hulubei National Institute of Physics and Nuclear Engineering and the General Inspectorate of the Gendarmerie provided a practical demonstration of a radioactive material transport vehicle and the physical protection equipment used by response forces. The virtual transport security exercise was conducted remotely with the assistance of experts from Oak Ridge National Laboratory in the United States, who used newly developed innovative exercise software to portray the hypothetical nuclear security event using advanced high-resolution satellite imagery.
Leave a comment criticalinfrastructureprotection, transport, transportsecurity