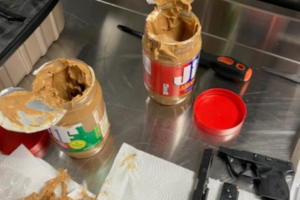 It was a sticky situation in a Transportation Security Administration (TSA) checked baggage screening room at John F. Kennedy International Airport (JFK) when a TSA officer removed two jars of peanut butter, each containing parts of a disassembled semi-automatic handgun artfully concealed inside.

The .22 caliber gun parts were wrapped in plastic and had been jammed into the middle of two plastic jars of peanut butter. The gun’s magazine was loaded with bullets.

When the checked bag triggered an alarm in a Terminal 8 X-ray unit, a TSA officer opened the bag and upon closer inspection uncovered the concealed firearm parts. TSA officials notified the Port Authority Police, who came to the checked baggage room in JFK’s Terminal 8, confiscated the items, tracked down the traveler in the terminal and arrested him.

“The gun parts were artfully concealed in two smooth creamy jars of peanut butter, but there was certainly nothing smooth about the way the man went about trying to smuggle his gun,” said John Essig, TSA’s Federal Security Director for JFK Airport. “Our officers are good at their jobs and are focused on their mission—especially during the busy holiday travel period,” Essig said.

Travelers may transport their firearms for a flight if they have a proper permit and the gun is properly packed. Firearms and firearm parts must be unloaded, packed in a locked hard-sided case and taken to the airline check-in counter to be declared. At that point the airline representative will make sure that the firearm is transported in the belly of the plane. Additionally, replica firearms are prohibited in carry-on baggage and also must be transported in checked luggage.