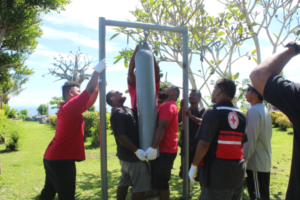 Palau initially received sirens which were installed as part of their early warning systems. However, the residents soon realised that these technologies also came with a myriad of challenges, including the sirens breaking down, difficulties in finding back ups or replacement parts, and the cost of maintenance.

These challenges were especially hard on the outlying islands, which did not have regular access to the necessary tools and resources needed to support and maintain the warning sirens.

The CREWS Pacific SIDS Pilot Project introduced the use of low-cost, low-tech early warning systems as a solution. These consisted mainly of bells that were strategically placed around the three initial areas of Ngaraard, Ngiwal and Kayangel.

The Palau National Weather Service took the lead in the implementation of the pilot project, in partnership with the National Emergency Management Office and the Palau Red Cross Society, which was already well established in the community through their Red Cross Disaster Action teams scattered throughout all 16 states of Palau.

Executive Director of the Palau Red Cross Society, Ms Maireng Sengebau, said they had to work with the community and build their capacity to understand what early warning systems are.

“We had to get them to accept these systems and show their support by providing us with a piece of land on which the bells would be installed,” she said.

Once the bells were installed, the Palau Meteorological Service, working in partnership with the Palau Red Cross Society, would meet with various communities and conduct table-top exercises and drills to familiarise them with the early warning systems and to demonstrate how and when they should be used.

"These activities empowered the people in communities. As a result of these meetings, they are now aware of what early warning systems are and why they are important, and also what to do when there is a disaster coming. They have now taken ownership the system and are the ones who operate it and they report to the state government if it needs maintenance.”

These simple early warning systems have contributed greatly to the resilience of the people of Palau.

“I joined the Palau Red Cross in 2017, and growing up, if there was a typhoon we would just buckle down in our houses and pray. Once the typhoon passes, we would wake up the next morning and just wait for government officials to come and bring help,” said Ms Sengebau.

“That is no longer the case. Now, before the typhoon even hits, families know when and how to act. If your house is not strong enough, they need to move to the evacuation shelter. If your house is strong, make sure that your family has a disaster kit.

“There are now things they can do to minimise the damage. Instead of waiting, we can now take action even before a disaster occurs. This is made possible through these early warning systems, and how they have empowered people in communities to act during natural disasters.”