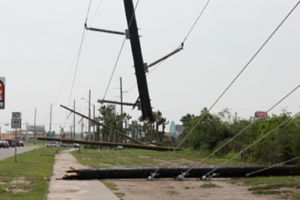 Princeton researchers funded by the U.S. National Science Foundation investigated the risk of this compound hazard occurring in the future under a business-as-usual climate scenario, using Harris County, Texas, as one example. They estimated that the risk of a hurricane-blackout-heat wave lasting more than five days in a 20-year span would increase 23 times by the end of the century.

But there is good news: Strategically burying just 5% of power lines — specifically those near main distribution points — would almost halve the number of affected residents.

"The results of this work, part of NSF's Coastlines and People Megalopolitan Coastal Transformation Hub, show the value of convergence science approaches for developing actionable solutions to society's major challenges, such as the increasing frequency of storm events," says Rita Teutonico, director of NSF's CoPe program.

Heat waves are among the deadliest types of weather events and can become even more dangerous when regions that rely on air conditioning lose power. Historically, a heat wave following a hurricane has been rare because the risk of extreme heat usually passes before the peak of the Atlantic hurricane season in late summer. As global temperatures rise, however, heat waves are expected to occur more often and hurricanes are likely to become more common and more severe, increasing the odds of hurricane-blackout-heat wave events.

"Hurricane Laura in 2020 and Hurricane Ida in 2021 both had heat waves following them after they destroyed the power distribution network," said Ning Lin, a civil and environmental engineer who led the study. "For this compound hazard, the risk has been increasing, and it is now happening."

In a new study, published in Nature Communications, Lin and co-authors looked at the risks associated with the compound hazard and how infrastructure changes could mitigate the potentially deadly effects. They combined projections of how often and when hurricanes and heat waves would strike in the future with estimates of how quickly power could be restored in areas with outages after a major storm.

The team chose Harris County — the home of Houston — as their model county because it has the highest population density of any city on the Gulf Coast. Hurricanes Harvey and Ike both walloped Houston, causing an estimated 10% of residents to lose power.

The team also considered power grid improvements that would reduce the impact of a hurricane-blackout-heat wave for residents. Burying 5% of wires near the roots of the distribution network would reduce the expected percentage of residents without power from 18.2% to 11.3%.

"Mostly, our current practice is randomly burying lines," Lin said. "By burying lines more strategically, we can be more efficient and more effective at reducing the risk."