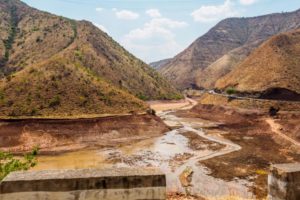 No rain and a 70-day heat wave spur crop failures, power cuts, and dangerously-low reservoirs across parts of China.

A historic drought in the southwest of China is drying up rivers, intensifying forest fires, damaging crops, and severely curtailing electricity in a region highly dependent on hydropower.

The Yangtze River, the third largest in the world, has dropped to half its average water levels, affecting shipping routes, limiting drinking water supplies, causing rolling blackouts, and even exposing long-submerged Buddhist statues. Some 66 rivers across 34 counties in Chongqing were dried up. The province of Sichuan, which gets more than 80 percent of its energy from hydropower, cut or limited electricity to thousands of factories in an effort to “leave power for the people.” Poyang Lake, the largest freshwater lake in China, is just a quarter of its normal size for this time of year.

China issued its first national drought alert in nine years. Rainfall in the Yangtze River Basin is down 45 percent from last July, the lowest it has been since 1961.

Sichuan is a major manufacturing hub and the curbing of electricity to factories has had global impacts, affecting suppliers of Toyota, Volkswagen, Tesla, Intel and Apple, as well as pesticide and solar panel manufacturers. Companies have been asked to continue rationing electricity. Toyota has slowly resumed operations using a generator; Tesla asked the government of Shanghai to ensure that its suppliers received enough power, saying it faced shortages of components as plants scaled back production. Other areas that source power from Sichuan have also made cuts, including Shanghai, China’s largest city, which turned off decorative lighting as a symbolic gesture.

Drought’s impact on the agriculture sector has also been severe, with thousands of acres of crops damaged in Sichuan and the neighboring Hubei province. In response, the Chinese government discharged water from several large upstream reservoirs, and the Ministry of Agriculture said it will try to artificially increase rainfall through cloud seeding, as well as spray crops with a water-retaining agent.