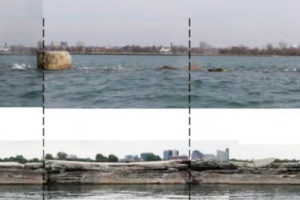 The movement of commerce involves the ability of the Corps to provide safe, reliable, efficient, and environmentally sustainable waterborne transportation systems. The agency is tasked with maintaining and repairing coastal navigation structures that are part of harbors and ports. The Corps' activities, including the type and scope of coastal navigation structures that the Corps may construct and maintain, are authorized by Congress. The authorization usually refers to the document or report recommending the project to Congress, which Congress then references in the legislation authorizing the project.

A number of the coastal navigation structures maintained by the Corps were built over a century ago and may no longer be sufficient to meet current conditions and changes in the climate. For example, increased wave and storm intensity in coastal areas threaten the integrity of jetties that shelter harbor basins and entrances from waves. This potentially jeopardizes lives and communities, disrupts commercial navigation traffic, and increases the frequency and cost of needed repairs.

A report accompanying the 2020 Energy and Water Development and Related Agencies Appropriations Bill includes a provision for GAO to review how to increase the Corps' capacity to repair and maintain existing projects before they deteriorate to the point of failure. This report describes what factors, if any, affect the Corps' ability to consider impacts not directly related to navigation when determining which existing coastal navigation structures to maintain and repair.

To address this objective, GAO selected coastal navigation structures at four projects for use as illustrative examples based on input from Corps officials. GAO reviewed legislation and Corps documents to verify statements about the Corps' oversight of the structures, as appropriate. GAO interviewed officials from Corps headquarters, all eight divisions based in the United States, and at least one district from each division (16 districts total). GAO also interviewed nonfederal partners, such as officials from state and local government and organizations representing the navigation industry.

Specifically, the authorizing language directs the Corps to consider navigation benefits and impacts for coastal navigation structures when making repair decisions. Corps officials said that because there is not enough funding to cover all the maintenance and repair needs for these structures in a given year, the agency prioritizes the structures based on navigation-focused criteria—primarily the amount of commercial tonnage. Yet some structures provide economic value even though they may not have the highest commercial tonnage, according to Corps officials. These officials said that they cannot incorporate nonnavigation benefits of structures, such as protection of coastal areas, when making decisions, absent a change to the authorizing language or an additional authorization.