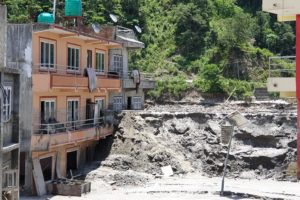 For days leading up to the disaster, Mr. Harisaran Shrestha had been listening to warnings about floods in the Melamchi, a river that flows through the foothills of the Himalayas in central Nepal. At least one local FM radio was repeatedly broadcasting notices about the possible release of water from the reservoir of a nearby drinking-water project and urging the public to avoid river banks and to refrain from activities like fishing, sand mining, and gravel collecting.

The local police and representatives were also issuing similar warnings around the town via microphones and loudspeakers.

Owing to these forewarnings, when the flood eventually hit his hometown, Melamchi Bazar, northeast of Kathmandu in Sindhupalchowk district, in June 2021, Mr. Shrestha was better prepared to react to the deluge. “As soon as it became apparent that the flood was going to sweep the entire town, I used my bus to ferry women, children, and disabled people in the neighbourhood to a safer location,” said Mr. Shrestha.

On June 15, just an hour after the final warning from the radio and police announcement on loudspeaker, massive floods near the confluence of the Melachmi River and the Indrawati River swept through the settlements near Shrestha’s hometown, killing at least five people and destroying property worth millions of rupees. At least a dozen people remain missing more than two months after one of the worst disasters in the town's history.

Despite saving many lives, Mr. Shrestha could not save his belongings because he had underestimated the scale of the disaster. “Our home was at a considerable distance from the river. It never occurred to me that the swollen river’s waters would reach this far,” Mr. Shrestha recalled in an interview.

Now displaced by the flood, Mr. Shrestha, 38, has been living with a family of six in a temporary shelter. The river, which has changed its course, now runs through his home and farmland.

“The river took everything. Thankfully, all of us are safe,” said Mr. Shrestha.

Mr. Dev Raj Subedi, the manager of Radio Melamchi, which issued the flood warnings, said that the alerts had proved effective in saving hundreds of lives, although only a few households managed to save some of their possessions--those they could carry with them. Radio Melamchi has been ritually providing flood-related warnings to the municipality’s estimated 50,000 inhabitants for the last few years, especially after the Melamchi Drinking Water Project gathered momentum in the 2010s.

“We issued the warning as soon as a government official informed us about the flood upstream. The warning proved especially helpful in the town area, whose inhabitants had the means to access the warning. That was one of the reasons there were no deaths in the town area,” shared Mr. Subedi.

Melamchi’s case is the latest example of how the growing use of mass media and early warning systems through data collected from meteorological and hydrological stations and rainfall-runoff model is proving effective in saving lives in Nepal, which is highly susceptible to disasters, owing to its topography and its hundreds of big and small rivers.

Every year, floods and landslides wreak havoc in Nepal, leading to huge numbers of casualties and untold destruction of property. Hill settlements are particularly vulnerable to landslides and flash floods, while riverine floods routinely deluge the lowland areas bordering India.

Every year during the rainy season, hundreds of families lose their house, agricultural yield, and means of livelihood, pushing them further into poverty.

Between 13 April to 16 October in 2020, floods and landslides killed at least 337 Nepalis, wiped out thousands of houses, and destroyed property worth billions of rupees, according to an estimate by Nepal’s Ministry of Home Affairs. More than 100 people remain missing on account of those floods.

Numerous factors including the 2015 earthquake, infrastructural projects and climate change have contributed to increasing disasters, according to experts. For instance, Sindhupalchowk district, the epicenter of the 7.8 magnitude earthquake that rattled Nepal in 2015, has seen a marked increase in landslides and floods following the tragedy that killed over 9,000 people.

Mr. Bikram Shrestha Zoowa, a senior Divisional Hydrologist at the Department of Hydrology and Meteorology, in Kathmandu, said that climate-induced hazards and unplanned development are emerging as challenges in recent decades.

Examples include recent disasters such as the Setigandaki flood in Kaski, Jure landslide-Sindhupalchowk in 2014, a Glacial Lake Outburst Flood (GLOF) in Tibet immediately above the Bhotekoshi River in Sindhupalchowk in 2016; a dry landslide in the Kaligandaki Corridor after the 2015 earthquake, another GLOF in Barun valley obstructing the flow of Arun River in 2017, and numerous climate-induced landslides during the 2020 monsoon and this year, said Mr. Shrestha Zoowa.

“Human interventions such as road construction in hill slopes without considering geological studies are certainly the causes of the region’s geological fragility, which results in small and big landslides in hilly regions. This is the man-made effect in addition to earthquakes responsible for hazards.”

According to the latest Intergovernmental Panel on Climate Change report, global temperature is expected to reach or exceed 1.5 degrees Celsius of warming averaged over the next 20 years. In 2019, a landmark report

by the International Centre for Integrated Mountain Development, an intergovernmental center based in Nepal, warned that a two-degree temperature rise could melt half of the glaciers in the Hindu Kush Himalaya region, destabilising Asia’s rivers.

In recent years, to minimise loss of life and property, an increasing number of communities vulnerable to disasters have begun to integrate social media platforms--such as Facebook and Twitter--and other technologies to provide early warnings. And as with Radio Melamchi, more than 500 FM radio stations across Nepal are being used to disseminate news and timely warnings. Many other local bodies are integrating SMS text messages to provide real-time alerts for people living in disaster-prone zones.

“When massive floods hit our village in 2016, most of the villagers with mobile phones had received SMS alerts three hours before the disaster. Those three hours gave us ample time to save not just our lives, but also our livestock and essentials like some grains and documents,” said Ms. Sajita Tharu of Laxmipur village in Kailali district. “Thankfully, we have not faced that kind of flood in recent years but we continue to receive alerts if water rises above the danger level. That allows us to remain mentally prepared and save essentials in case the flood hits us.”

As part of the community-based early warning approach, residents living in catchment areas constantly pass on information about the water level in their area to residents of villages downstream. The community groups also get constant flood alerts from the Department of Hydrology’s regional station. The alerts--including text messages, phone calls, and information from weatherboards--are widely circulated by the members of the Community Disaster Management Committees, which were formed by programs designed to enhance the communities’ flood resilience. Most members of these user committees are women, as many working-age men migrate to India or other countries in search of jobs.

Ms. Manakala Kumari Chaudhari, the deputy mayor of Rajapur Municipality in far-western Nepal, said that the timely early warning system in his area has been instrumental in saving lives and properties. As soon as the water level rises above the danger level upstream, several people who own mobile phones in his municipality--a delta created by the Karnali River--receive warnings.

“Save for some exceptions, most locals respond to warnings and take the required safety measures. The timely alerts also provide ample time for all stakeholders to make the necessary preparations for disasters,” said Ms. Chaudhari.

Such timely warnings are critical because they provide enough time to save lives. The area is susceptible to constant floods from big rivers like the Karnali and Babai and from small streams, which are usually dry in other seasons.

In preparation for the seasonal floods, communities in western Nepal have also built community shelters, animal sheds to shelter their livestock and grain-storage facilities to save grains.

Since Nepal adopted federalism in 2015, there have been efforts at all three levels of government to embrace disaster-resilience policies. The central government, the provincial government, as well as many local governments have adopted policies related to disaster risk reduction. Recently, under the Home Ministry, the National Disaster Risk Reduction and Management Authority prepared the National Monsoon Early Preparedness and Response Work Plan

2021. However, questions remain around the implementation of these policies and the authorities’ ability to handle large-scale disasters, especially owing to their lack of resources. Moreover, growing landslides along newly constructed highways, hydropower projects and other infrastructures-- many of which were cleared after proper Environment Impact Assessment--- have reinforced the need for better policies to promote resilient infrastructure.

But overall, the early warning systems seem to be reducing the impacts of floods in many parts of Nepal. Mr. Shrestha Zoowa, the hydrologist, said that early warning systems have proven effective in saving hundreds of lives every year, especially in vulnerable settlements along big rivers such as the Karnali, Babai, Narayani, and Koshi. The data gathered from weather stations, rainfall-runoff models are disseminated in form of daily bulletins through various media platforms, while the weather forecast relies on the Weather Research and Forecasting model, an advanced numerical weather prediction framework designed for operational forecasting and atmospheric research needs.

In recent years, the Department of Hydrology and Meteorology has been working with various non-governmental organizations in developing disaster information management systems and online databases to provide real-time information to augment its early warning systems.

“For most flood events, we have effective plans, technologies, and historical information to issue timely and reliable warnings to vulnerable settlements. But we lack an effective early warning system for flash floods in the hills and for settlements along small rivers, which are highly unpredictable,” said Mr. Shrestha Zoowa.

Nepal also needs to do more to ensure that people respond to early warnings. Although many local communities are making good use of weather forecasts and flood alerts, some are unable to take advantage of the information, often because they lack the economic means and/or technical knowledge to know what to do. Often the warning messages come with technical jargon and they may not effectively relay the impact information of the disaster relevant to people’s day to day life and experience. “The early warning systems have become much better over the years but there is still a lot to be done,” said Mr. Shrestha Zoowa.