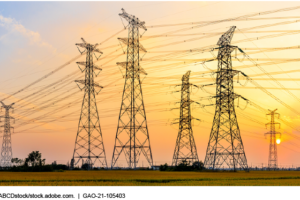 The nation’s grid delivers electricity that is essential for modern life. However, the grid faces risks from events that can damage electrical infrastructure (such as power lines) and communications systems, resulting in power outages. These outages can threaten the nation’s economic and national security.

They can also disproportionately affect low-income groups, in part because such groups have fewer resources to invest in backup generators and other measures to minimize the impact of outages.Even though most of the electricity grid is owned and operated by private industry, the federal government plays a key role in enhancing grid resilience.
• The Department of Homeland Security (DHS) is responsible for coordinating the overall federal effort to promote the security and resilience of the nation’s critical infrastructure sectors.
• The Department of Energy (DOE) leads federal efforts to support electricity grid resilience, including research and technology development by national laboratories.
• The Federal Energy Regulatory Commission (FERC) reviews and approves standards developed by the North American Electric Reliability Corporation, the federally designated U.S. electric reliability organization.

In addition to the risks described in the prior page, the electric utility industry faces complex challenges and transformations, including:
• aging infrastructure;
• adoption of new technologies, such as information and communication systems
to improve the grid’s efficiency; and
• a changing mix of power generation. The traditional model of large, centralized power generators is evolving as retiring generators are replaced with variable wind and solar generators, smaller and more flexible natural gas generators, and nontraditional resources. Such resources include demand-response activities which encourage consumers to reduce their demand for electricity when the cost to generate electricity are high, and various technologies (e.g., solar panels) that generate electricity at or near where it will be used—known as “distributed generation.”

Key Opportunities
Agencies have implemented several of GAO’s recommendations for improving electricity grid resilience. For example, in March 2016, we recommended that DHS designate roles and responsibilities within the department for addressing electromagnetic risks, which DHS did in 2017. However, as of September 2021, agencies had not yet implemented a number of GAO recommendations that represent key opportunities to mitigate risks in the following areas: