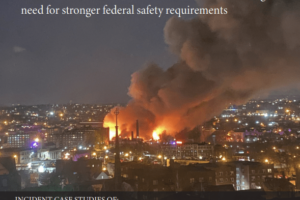 On August 31, 2022, the EPA published proposed revisions to the Risk Management Program (RMP), which regulates approximately 12,000 high-risk facilities in the U.S. that use or store certain highly hazardous chemicals. EPA was specifically directed by Congress to use this program to prevent disasters, yet more than 140 harmful chemical incidents occur on average every year.

Three such incidents in January, 2022 that are the focus of the report include: a fire at the Winston Weaver Fertilizer plant in North Carolina that caused 6,500 people to evacuate and nearly triggered a deadly ammonium nitrate explosion; an explosion at the Westlake Chemical South plant that caused 7,000 students to shelter in place in the Lake Charles area in Louisiana; and a massive fire that spread to the Qualco chemical plant in Passaic, New Jersey and came dangerously close to igniting an estimated 3 million pounds of hazardous chemicals.

Preventing Disaster offers actionable recommendations the EPA should include in its final rule that could prevent similar incidents from happening in the future, including:

- Requiring all RMP facilities to consider, document, and implement safer chemicals and technologies;
- Expanding the Risk Management Program to cover ammonium nitrate and other hazardous chemicals which remain excluded in the proposed rule;
- Requiring RMP facilities to not only consider the risks posed by natural hazards, as proposed in the draft rule, but to take meaningful steps to prepare for those risks, such as implementing backup power for chemical production and storage processes.

“Overall,” the report concludes, “EPA’s draft rule, rather than adopting common-sense prevention requirements, continues to rely on voluntary actions by high-risk facilities. This approach has failed to prevent many chemical disasters over the last 25 years. If the draft rule is not strengthened, facility workers and neighbors across the country will continue to bear the human, environmental, and financial costs of more preventable disasters.”

“The EPA still has time to get this rule right,” said Steve Taylor, Program Director for Coming Clean, who contributed to the report. “Communities at the fenceline of these hazardous facilities, and the workers inside them, are sick of industry stonewalling and EPA excuses. A stronger rule is needed to ensure that hazards are removed, or we will continue to see more chemical disasters.”

“We’re glad that EPA recognizes the need to reconsider the RMP rule; preventing disasters is a longstanding priority for EJHA. Unfortunately the draft rule is full of more voluntary measures, which decades of incidents have proven do not work.” said Michele Roberts, National Co-Coordinator of the Environmental Justice Health Alliance for Chemical Policy Reform. “We are depending on EPA to have the moral and political courage to keep the promises President Biden has made to our communities— that means a final rule that requires the transition to safer chemicals and processes wherever possible. Removing hazards before disasters can occur is the best way to protect workers and communities.”