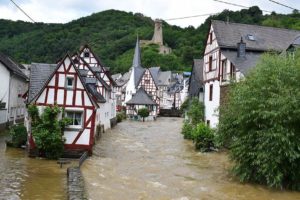 The UN Secretary-General’s Special Representative for Disaster Risk Reduction, Mami Mizutori, today extended her condolences to all those affected by the current severe floods across Europe and urged greater investment in disaster risk reduction against a natural hazard which, until the arrival of COVID-19, has typically affected more people annually than any other disaster type.
“I send my heartfelt condolences to the people and governments of Germany and Belgium where lives have been lost and my sympathy is also with the people of the Netherlands, France, Luxembourg and Switzerland on the disruption caused by these record rains. Lives, homes, and livelihoods have been lost in a flood event of such magnitude that people had difficulty in comprehending what action they could take to protect themselves from it.
“Europe has seen major flooding before but rarely on this scale and with such harrowing loss of life. This underlines the importance of getting to grips with measures to adapt cities, towns and rural areas to the shocks that arise to our weather systems in a warming world. We need to make our urban areas more resilient to floods and storms to mitigate the impacts of large volumes of water and the landslides that usually accompany such phenomena.
“I am particularly concerned about media reports that in at least one incident nine persons living with disabilities lost their lives. National and local strategies for disaster risk reduction must take full account of the needs of such persons as well as others who may have mobility issues including older persons, children, and pregnant women. It is essential that disability organizations are involved in the disaster management planning process.
“While linking one disaster event with climate change is complicated, it is undoubtedly the case that over the last twenty years of record-breaking temperatures there has been a concomitant rise in the number of extreme weather events across the globe. The challenge before us is not just to reduce greenhouse gas emissions but to invest in adaptation to save lives, reduce economic losses and protect critical infrastructure.
“Europe will meet later this year in Portugal to discuss progress on implementing the Sendai Framework for Disaster Risk Reduction, the global plan to reduce disaster losses. That discussion will be an opportunity to reflect on the lessons learned from the tragic events now unfolding across Europe due to record heavy rains and to see how we can better adapt to climate change, improve multi-hazard early warning systems and strengthen public understanding of disaster risk.”
Leave a comment criticalinfrastructureprotection, disasterpreparedness, floods, naturaldisaster