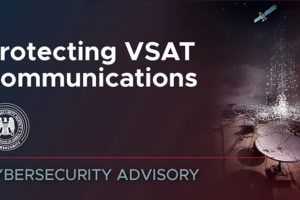 The National Security Agency (NSA) updated its Cybersecurity Advisory (CSA) today for securing very small aperture terminal (VSAT) networks, “Protecting VSAT Communications.” The advisory aims to help organizations understand how communications may be at risk of compromise and how they can act to reduce risk.

The recent U.S. and European Union public statements noted the Russian military launched cyber attacks against commercial satellite communications to disrupt Ukrainian command and control in February 2022. This cyber activity against Ukraine further underscores the risk to VSAT communications for both espionage and disruption.

A number of U.S. government missions use VSAT networks for remote communications when other options are not feasible. However, VSAT communication links were not built with security in mind — often resulting in traffic being sent unencrypted.

NSA recommends government VSAT networks, such as those designated as National Security Systems (NSS) and ones used by Defense Industrial Base (DIB) organizations, enable all available transmission security protections on VSAT networks. NSA also recommends encrypting all communications prior to transmitting across VSAT links, keeping hardware and firmware updated, and changing any default credentials before use.