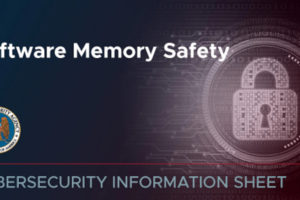 The National Security Agency (NSA) has published guidance to help software developers and operators prevent and mitigate software memory safety issues, which account for a large portion of exploitable vulnerabilities.

“Memory management issues have been exploited for decades and are still entirely too common today,” said Neal Ziring, Cybersecurity Technical Director. “We have to consistently use memory safe languages and other protections when developing software to eliminate these weaknesses from malicious cyber actors.”

Microsoft and Google have each stated that software memory safety issues are behind around 70 percent of their vulnerabilities. Poor memory management can lead to technical issues as well, such as incorrect program results, degradation of the program’s performance over time, and program crashes.

NSA recommends that organizations use memory safe languages when possible and bolster protection through code-hardening defenses such as compiler options, tool options, and operating system configurations.