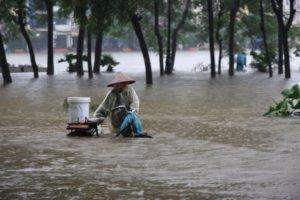 The Southeast Asia Flash Flood Guidance System (SeAFFGS) has been officially launched, ushering in the prospect of improved early warnings for a major natural hazard, which accounts for a significant portion of the lives lost and property damages due to flooding in the region.

Under a new agreement, the SeAFFGS will be operated by the Viet Nam Meteorological and Hydrological Administration (VNMHA), which is providing effective flash flood guidance and forecasts within Viet Nam and will act as the regional center covering Cambodia, Lao PDR, and Thailand, providing forecast products, data, and training.

The new regional centre will strengthen the World Meteorological Organization’s global Flash Flood Guidance System network, which now covers 67 countries and is a key plank in WMO’s campaign to ensure that Early Warning services reach everyone in the world in the next five years.

Flash floods claim the lives of thousands of people every year and have big social, economic and environmental impacts. Southeast Asia has a tropical monsoon climate and is one of the regions heavily affected by hydrological disasters such as flood, flash floods and landslides. It has long been recognized that the development and implementation of a flash flood forecasting system would greatly enhance public safety.

Accurate and timely warning of flash floods enables the mandated national authorities to undertake appropriate measures, thereby supporting them to protect the population at risk from their disastrous effects.A Memorandum of Understanding was signed at a ceremony at WMO headquarters on 8 August, formally designating VNMHA as the SeAFFGS Regional Centre and underlining mutual commitment to improve hydrological activities and early warnings across Southeast Asia.

“After 5 years of hard works and remarkable efforts, a flash flood guidance system in South East Asia was officially established which I believe will save a lot of lives and reduce significant damage cost for the region. The MOU signing ceremony today marks a very important milestone for the Southeast Asia community in general and for Vietnam in particular to enhance resilience to disasters,” said Professor Tran Hong Thai, VNMHA Administrator.

Dr Wenjian Zhang, Assistant Secretary-General of WMO said the Regional Centre would play a critical role in the overall functioning of the SeAFFGS project, strengthening collaboration and increasing the capacity of participating National Meteorological and Hydrological Services to provide timely and accurate forecasts and warnings of hydrometeorological hazards. He spoke on behalf of WMO Secretary-General Prof. Petteri Taalas.

The SeAFFGS has been developed under the project “Building Resilience to High-Impact Hydrometeorological Events through Strengthening Multi-Hazard Early Warning Systems (MHEWS) in Small Island Developing States (SIDS) and Southeast Asia (SEA)”, which is funded by the Government of Canada (Environment and Climate Change Canada – ECCC), and implemented by the World Meteorological Organization and the Hydrologic Research Center (HRC), while National Oceanic and Atmospheric Administration (NOAA) is a satellite data provider into the System.
Flash flood guidance system for Southeast Asia

Following the signing of the MoU, the Regional Centre now carries the responsibility of, maintaining the server used for SeAFFGS and securing File Transfer Server to exchange data and information, provision of capacity-building initiatives and to facilitate effective coordination among members involved in SeAFFGS.

Flash floods differ from river floods in their short time scales and occurrence on small spatial scales, which makes flash flood forecasting a different challenge from large-river flood forecasting. In flash floods forecasting, we are concerned foremost with the forecast of occurrence, and herein focus on two causative events: 1) intense rainfall; and 2) rainfall on saturated soils. Flash floods occur throughout the world, and the development times vary across regions from minutes to several hours depending on the land surface, geomorphological and hydrometeorological characteristics of the region. However, for the majority of these areas, there exists no formal process or capacity for developing flash flood warnings.