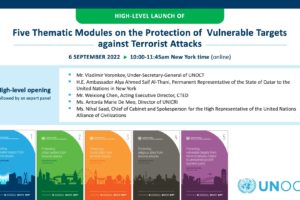 The high-level opening was streamed live via UN WebTV. It will be followed by an expert session, during which Member States will share experiences, good practices and tools related to the themes of the five modules:

The 5 modules are published in Arabic, English, French and Russian and are presented by the United Nations Global Programme on Countering Terrorist Threats Against Vulnerable Targets, which is led by UNOCT and jointly implemented with CTED, UNICRI and UNAOC.

The new guides present the knowledge and resources and lessons learned identified during the three Expert Group Meetings held by UNOCT with partners CTED, UNAOC and UNICRI in 2021. They also complement the 2018 United Nations Compendium of Good Practices on the Protection of Critical Infrastructure (CIP) against Terrorist AttacksPDF by focusing on public places/"soft" targets as distinct types of sites worthy of a dedicated security approach. The guides feature specific case studies, good practices and recommended tools from around the world to support both the public and private sectors to further strengthen the safety and security of their public places, keeping them open and accessible and promoting shared responsibility.